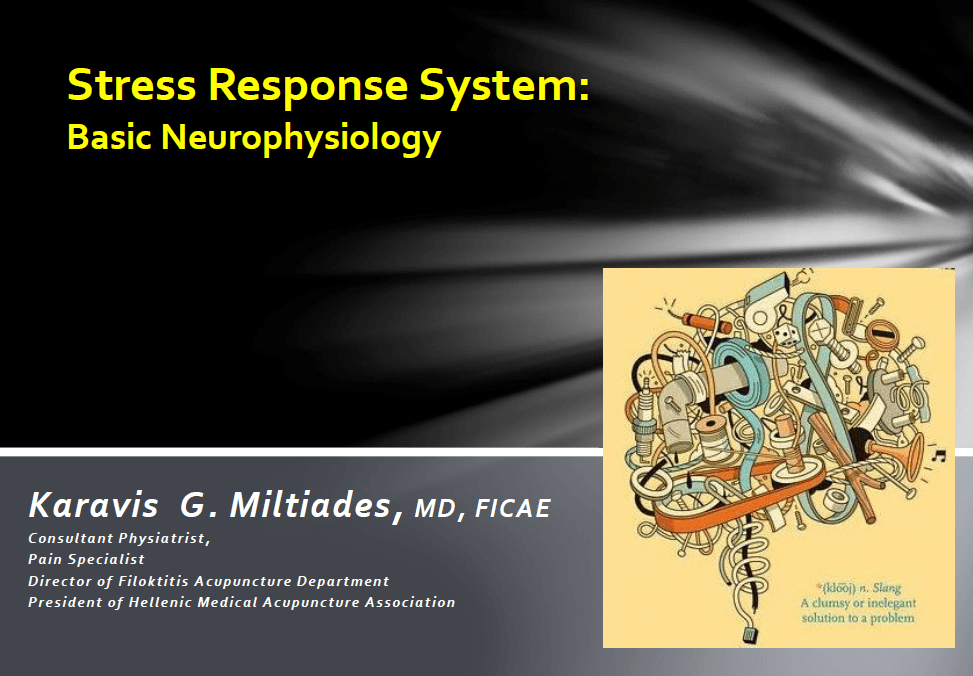 Many studies have reported positive findings regarding the use of acupuncture for psychiatric, psychosomatic or somatoform disorders. Some of these suggest that through acupuncture it is possible to obtain favorable results treating mood-related symptoms and/or disorders. Acupuncture is also widely used (statistically significant effects compared to controls) in mental disorders such as anxiety, dementia, eating disorders, sleep disorders, substance abuse (addictions) and posttraumatic stress disorders (three recent reviews: Feinstein D et al, 2010 and Hollifield M et al, 2011, Young-Dae Kim et al, 2012). In basic research, manual acupuncture and especially electroacupuncture seems effective on rat models with stress. It is concluded that can be used as an adjunct therapy in stress related disorders. The recent advances on neurophysiology, neurochemistry and brain imaging, together with behavioral evidence offer the opportunity to propose possible mechanisms regarding the effectiveness of acupuncture (endorphin system, mesolimbic dopamine system, HPA axis, somato-autonomic regulation, etc). Besides medical acupuncture, Chinese Medicine provides her own alternative explanation on how endogenous or exogenous factors produces negative emotions and psychological stress which in turn might generate mental, emotional and physical symptomatology (Aung S, 1995).

One of the fundamental aspects of Traditional Chinese Philosophy and Medicine, the yin-yang theory, summarizes the concept of homeostasis. Ying-yang represent a dynamic equilibrium, an interaction between two different, opposite and complementary forces. According to Chinese Medicine, the low of complementary, interdependent and interconnected balance in the natural world can also be applied to every physical phenomenon and/or every function of an organism (Porkert 1974). Excitation and inhibition, sympathetic and parasympathetic, vasoconstriction and vasodilatation, muscle contraction and relaxation, inflammation and anti-inflammation are pairs of contrary, but absolute interconnected functions. Between them a dynamic balance should be maintained. This duality lies at the origins of many branches of classical Chinese science and philosophy (Steininger, Hans et al, 1971). Non-equilibrium or near – equilibrium state refers to a disease condition. Acupuncture restores or maintains the balance of yin and yang.

In modern medicine, instead of yin-yang we use the term homeostasis (homeostasis is from Greek: (όμοιος) homios, that means “similar” and (στάσης) stasis, that means “standing still”), allostasis, metabolism and adaptability where hypothalamus controls every one of them. According to encyclopedia Britannica, “Homeostasis is any self-regulating process by which biological systems tend to maintain stability while adjusting to conditions that are optimal for survival. If homeostasis is successful, life continues; if unsuccessful, disaster or death ensues”.

It is generally believed today, that the therapeutic (and partly analgesic) effect of acupuncture (to relieve and treat various inflammatory diseases and functional disturbances) is related to its ability to regulate the Stress Response System and more precisely the two peripheral limbs (pathways) of the stress system, the HPA axis and SAM axis (Jeoung-Woo Kangk, 2004). There are reports suggesting that electroacupuncture (E/A) activates both HPA axis and sympathetic adrenomedullary system and stimulates the release of glucocorticoids, the final effectors of the HPA axis which in turn have potent anti-inflammatory properties (Liao et al, 1979, 1981). Was also reported that E/A modulate the secretion rate of catecholamines  (substances with anti-inflammatory properties through β-adrenoreceptor activation) from adrenal medulla, influencing sympathetic activity due to trauma of the needle (Mori et al 2000, Sato at al 1996). On the other hand, other reports that examined the parasympathetic, long term effect of acupuncture in humans and animals do not show such important effect on HPA axis (ACTH and cortisol levels), failing to verify the existence or not of this specific neural pathway of action of acupuncture.

From our medical view, the stimulation of peripheral nerves (acupuncture, acupressure, moxa, laser, E/A etc.) modulates the neural activity (fMRI) in the diencephalon and other brain structures. These structures affect mood and emotions and are responsible for the regulation of autonomic, endocrine and immune functions. Emerging from the hypothalamus (a major part of diencephalon), the HPA axis and SAM axis, coordinate both the circadian release of CRH/AVP/ACTH and cortisol and cathecholamines (E and NE). Research have shown that delayed gastric empting and accelerated colonic transit induced by acute stress are mediated via central CRF2 and CRF1 receptors (Nakade et al 2005, 2007) and are restored after E/A at ST 36 in rats. Moreover, acupuncture at various points stimulates parasympathetic activity and inhibits sympathetic hyperactivity under chronic stressful conditions, restoring the inner homeostasis and helping patients suffering from stress-associated gastro-intestinal disorders.

In the current presentation we will describe the latest research related with stress, psychosomatic symptoms and acupuncture. We will define the terms somatization, psychosomatic and somatoform disorders with their diagnostic criteria. We will analyze the psycho-neuro-immunologic approach, with emphasis in acupuncture points and techniques. Furthermore, we will present the latest data and we will share with you the challenges and problems we face in our daily routine using acupuncture in patients with stress and stress related disorders.